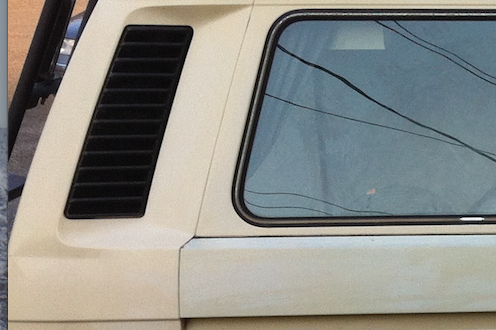 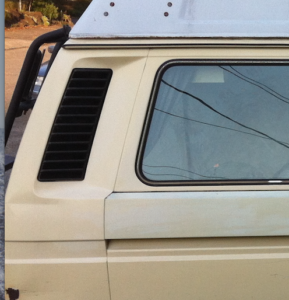 From time to time inspect the duct work in the right rear pillar that supplies fresh air to the breather mounted in the engine compartment.  There is a plastic vent that air is drawn through on down the channel and to the intake box.  Often the duct is deteriorating and filled with leaves, cracked and broken, collapsed, or clogged from falling apart from the inside out.

US and Canadian models had one on the left side pillar for 82/83 diesels.  Early 1.9 models did not have the baffle and snorkel.  Syncros had a plastic duct rather than the corrugated duct that non-Syncro models had.

If you have the earlier 1.9 models that didn’t come with a baffle and duct they can be easily added from a donor or with aftermarket kits.  This will reduce the amount of road dust and debris and provide fresh cool air from above.  There won’t be much if any power produced as a result from the cooler air but you will get much less dust into the air filter possibly reducing maintenance costs later on.

The entire duct can be removed and pulled through relatively easily.  Remove the right rear light housing and the side marker light.  Take off the right-hand side rear grill and disconnect the lower part of the duct at the elbow in the bottom of the pillar.  On the upper outside of the van there is a vent cover.  Remove it and you will see the two tabs that hold the upper baffle.  Pull forward and the baffle will come off.  Pull the entire duct out through the top.

With the 2.1 models there is a relay tucked away behind the tail light.  This relay is for the idle control for power steering.  Inspect the area for corrosion and clean up around it.  Removing the light cluster is necessary to see it and now is just as good a time to inspect it as any.  Earlier models such as the 1.9 do not have this relay.  As it is from the factory if water gets in it, such as from driving in heavy water, water will stay in the relay.  Remove the screws and turn it over so that water will not stay in the relay should it get covered in water.  Unless you are offroading or driving through heavy or deep water you shouldn’t need to worry about this at all.

While it is oval in shape it is a 3-inch diameter duct when rounded.  Aftermarket replacement ducts are commonly and easily available.  Just not in an oval shape with the proper connections.  As a result, round 3-inch plastic flexible duct can readily be used.

The OEM flexible pipe is made from a combination of paper, thin aluminum, and possibly a layer of some kind of plastic. Outside the duct is a plastic layer possibly to keep water from damaging the duct.  It is very similar to the paper type used in the air-cooled engines previously.

Aftermarket round replacement ducts can simply be forced into an oval shape.  Since the 1.9 and 2.1 engine does not use vast amounts of air through the intake any minimal changes in the shape of the duct don’t matter.  Even large Subaru engine swaps and turbo diesel replacements get more than enough airflow.  After all, it’s still a 3-inch duct that supplies air.  Simply press the duct into an oval shape so that it fits down the channel for the duct.

Before installing the new duct be sure to clean out the channel of any leaves and other debris.  This is a spot that can collect debris that can hold moisture and create rust spots.  Periodically it should be inspected even if you aren’t experiencing problems with the van.

Originally there is a tape that secures the dust to the upper baffle.  Electrical tape thoroughly wrapped around it will be the closest thing to the original vinyl tape used at the factory.

Slip the duct and baffle back down the body channel.  There are metal tabs that the top of the duct fits into the body to secure the baffle.  Push the baffle onto the tabs to secure it.  Some of the body edges are very sharp so work slowly and carefully if you prefer not to get nicked on a sharp edge.  Below, push the new duct onto the elbow and make sure it is firmly connected.  Reinstall the grill and lights.

Previous Painting Your Vanagon Dash For New Looking Results
Next Dispersed Camping or Boondocking is a Great Way to Enjoy Camping!

Repairing the Sink Drain in the Vanagon Westfalia Camper 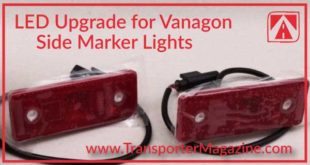 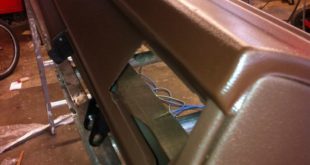 There are many reasons to take your dash out of the van. Usually and unfortunately …