Home / Campers / Bridge of the Gods at 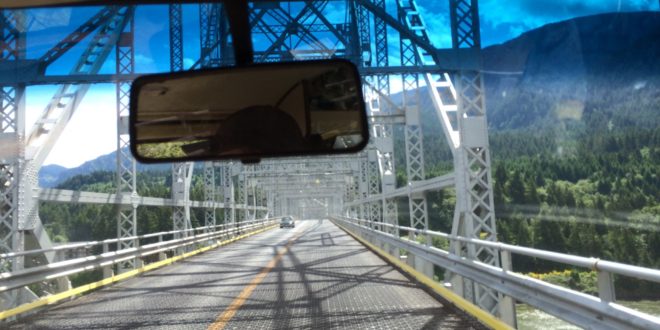 Bridge of the Gods at 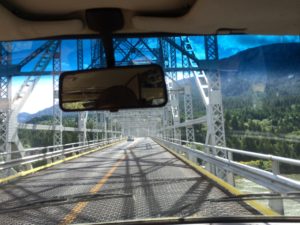 Bridge of the Gods was built in the 1920’s.  It connects Washington state and Oregon over the Columbia River and crosses near the Bonneville Dam in southern Washington.  Riveted steel beam construction bridges from this era are not so common anymore and this one certainly has a unique feel.

Family friends that invited us take a similar trip every year.  They had reserved spots well ahead of time and they had plenty of them.  We got a nice spot that was surrounded by trees and brush for privacy. 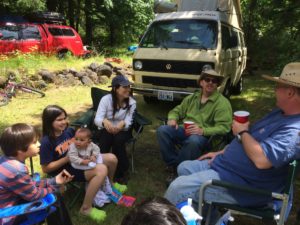 From Seattle, our first stop was to get gas near Bonneville.  We made it that far without the “I have to pee” shouted from the backseat.  Overall the four boys were better than expected.  As you can imagine, being cramped in a car for hours can wreak havoc on a quiet peaceable trip.

Our group stayed at a campground near the Bonneville Dam called Lewis and Clark Campground.  The campground is near the Columbia river gorge and has hiking and bike trails as well as fishing and swimming nearby. The town of North Bonneville is a few minutes away too.  There were hookups for water and power and the office has some offerings too.

This was the very first time that we had taken the Westfalia to any sort of private campground or RV park with power and water.  Tent camping, Westfalia, and RV sites are scattered around the grounds.  We have stayed in a couple state parks but mostly we rough it in the National Forest without hookups or anything. 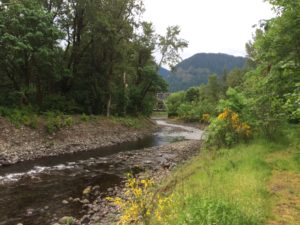 We went shad fishing at the Bonneville Dam and were initially unaware that the salmon season had been extended for a month because I didn’t check my emails from the Washington Dept of Fish and Wildlife.  We had no salmon rods, only 6 foot light rods.  We didn’t catch any shad anyway to amount to much.

We weren’t the only ones there to fish, and Bonneville Reg gave us some tips and insight on fishing the shore along the dam (he is how we found out the fishing for salmon had been extended). 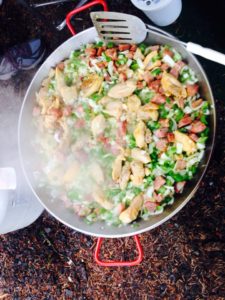 One of the group of 25 caught 3 shad early in the day.  The fish were filleted and deep fried.  Having only used shad for bait for bass in the South I was surprised at how tasty they were even though they had a slight fishy taste to them.

The amount of food that was prepared was astounding and we were lucky to have been invited by such nice people and talented cooks.  The group had to number at least 25 people but the amount of food prepared would have likely fed many more.

This wasn’t a typical hotdog camping food trip.  There was a list of foods that did not stop at brisket slow cooked for the whole day, spicy barbecued ribs that you couldn’t put down, Malaysian style curry, and even poutine (that crazy French fry dish from Canadia with French fries, gravy, and cheese curds). 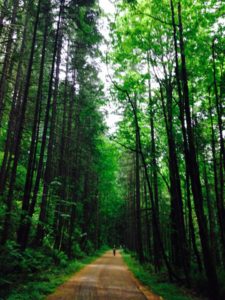 From the campground, the Bridge of the Gods is fairly close by, as is the Bonneville Dam (and fishing), and a grocery store is in the small town a few miles away.

There are easy hiking trails for the kids at the bridge on the Oregon side.  There were quite a few smaller kids so as a group we took the paved path to the hatchery called Eagle Creek Trail.

The close proximity to fishing, hiking, and the campground made the trip relaxing.  Far enough away that the hustle and bustle of the city were gone but things were still convenient.

5 Delicious Dishes in Your Westfalia Kitchen

On Your Way to Not Particularly Anywhere

Repairing the Sink Drain in the Vanagon Westfalia Camper

Westfalia full campers come with a sink in the kitchen.  Sometimes the kitchen sink drain …